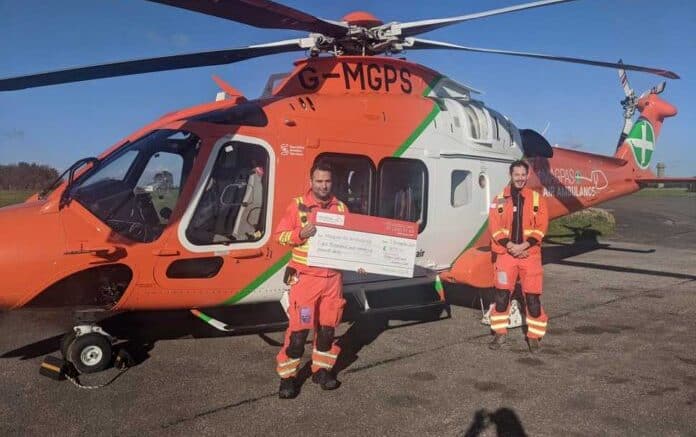 Bourn Golf Club has raised a total of £8,076 for the charity of their choice Magpas Air Ambulance after arranging a variety of fundraising activities. Members were set several fun challenges to complete throughout the year, including a Ladies Day bake-off, a Captain vs Vice Captain showdown, and even a lockdown ‘chipping challenge’ where those who participated attempted to chip 10 golf balls into a target. A forfeit was also set up in the clubhouse all year round and members were encouraged to donate £1 for every shot that landed in the bunkers. The fundraising team consisted of Ladies Captain Debbie Witherow, Mens Captain John Taylor and Seniors Captain Dennis Rait.

“We chose Magpas Air Ambulance as our 2020 Captains’ Charity as we wanted to support something local and, once we had visited their base in Wyton, we knew that every penny raised would be put to good use,” says Debbie Witherow, Ladies Captain at Bourn Golf Club. “The members of Bourn Golf Club have risen to every challenge we’ve set and their generosity has overwhelmed us”.

Magpas Air Ambulance is a medical charity that provides pre-hospital emergency care to patients in the air or on land. The charity operates 24/7 from its base in Cambridgeshire and cares for a population of over 10 million across the East of England. Magpas is not a state-funded service and the charity relies solely on public donations to continue its mission.

“The team at Magpas Air Ambulance has been impressed with the success of the fundraising by all those at the Bourn Golf and Country Club. Everybody has worked incredibly hard to change planned activities into virtual events and this has been very well supported,” a spokesperson for the charity says. “The need for our service has been consistent whilst our income has fallen. People in our communities are still suffering from cardiac arrest, medical emergencies, road traffic collisions, and falls from height to name but a few. We are humbled and very grateful for the difference you have made at this time.”

Bourn Golf Club is an extensive golf course situated in the village of Bourn, on the outskirts of Cambridge. The club is currently undergoing renovations to their main golf club site, including a relaxing wellness centre with swimming pool facilities and a state of the art restaurant. The location boasts an 18 hole par 72 championship parkland course that measures 6,594 yards from the white tees and has an excellent reputation for both its pristine condition and impressive design. The club is currently shut as per recent Government guidelines and is expected to reopen on December 3, 2020.

CALMTown launches Together in January

The UK’s most vulnerable households could see a monthly increase of £63.60 Cambridgeshire Live – Home …

See the most iconic views of Cambridge, while discovering the ‘uncomfortable’ histories that shaped them through this new and unique walking tour…

A substantial part of ABAX investments are spent through procurement, and by updating the policy, ABAX is adding extra quality control steps to ensure suppliers meet their minimum standards of GDPR and CSR.
The post ABAX launches new sustainable procurement policy appeared first on Cambridgeshire Chambers of Commerce. Cambridgeshire Chambers of Commerce…

This is in contrast to another senior royal Cambridgeshire Live – Home …