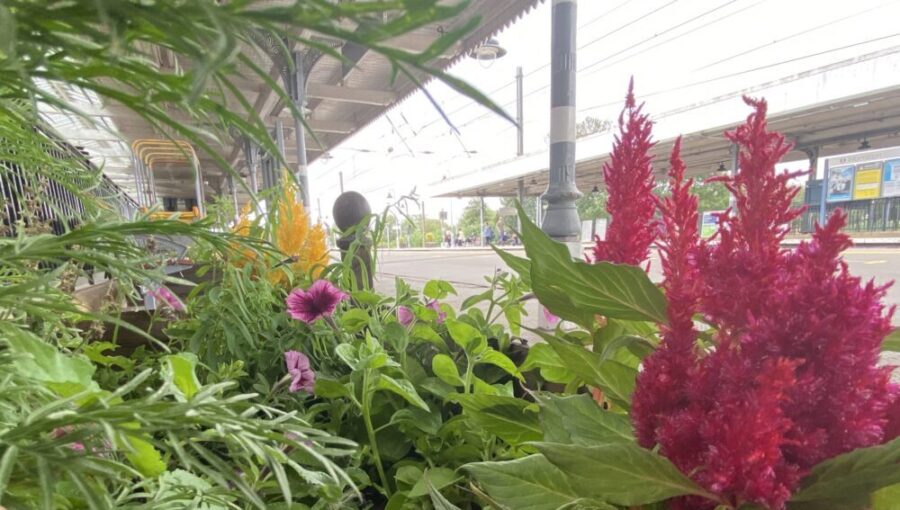 Greater Anglia staff at Ely station are on a mission to delight passengers with flowers, holding a competition to see who can create the best display.

The ‘Ely Station Turf Wars’ competition has seen 12 members of staff allocated to six planters on the platforms and asked them to get creative with their planting schemes. Staff divided into teams of two and were asked to pick a planter and a packet of seeds to get them started. They then had to come up with a team name and commit to caring for the displays for at least five months to the end of the August, when the winners would be selected. At the end of the month, passengers will be asked to vote on the best display with a trophy for the winners.

The competition was organised by Train Dispatcher, Jade Wilkinson, who said: “I came up with the idea back in March when the station was looking a bit sorry for itself just coming out of the winter months.

“I felt like it would be something fun for the staff to get involved with during the lockdown when things were very quiet at the station and would create a nice welcome for our customers when they could return.

“So far everyone has done brilliantly and the platforms are looking so much more attractive and welcoming as a result. I hope that passengers will notice them and it will brighten their day.”

As more people return to rail, Greater Anglia is seeing some trains and stations getting busier. More trains have been added to the timetable and customers are encouraged to use the full length of trains and platforms. They are also advised to use the operator’s ‘Less Busy Trains tool’ at greateranglia.co.uk and opt for a quieter train.

Face covering compliance is high on trains and stations and trains are well ventilated either by air conditioning which replaces air inside the train every six to nine minutes or by open windows. Greater Anglia is also continuing with enhanced cleaning and sanitisation of trains and stations.

Full details of the revised timetable and measures Greater Anglia is taking to keep people safe are available from www.greateranglia.co.uk

Wellbeing – How has lockdown affected you? How do you feel as we look forward?