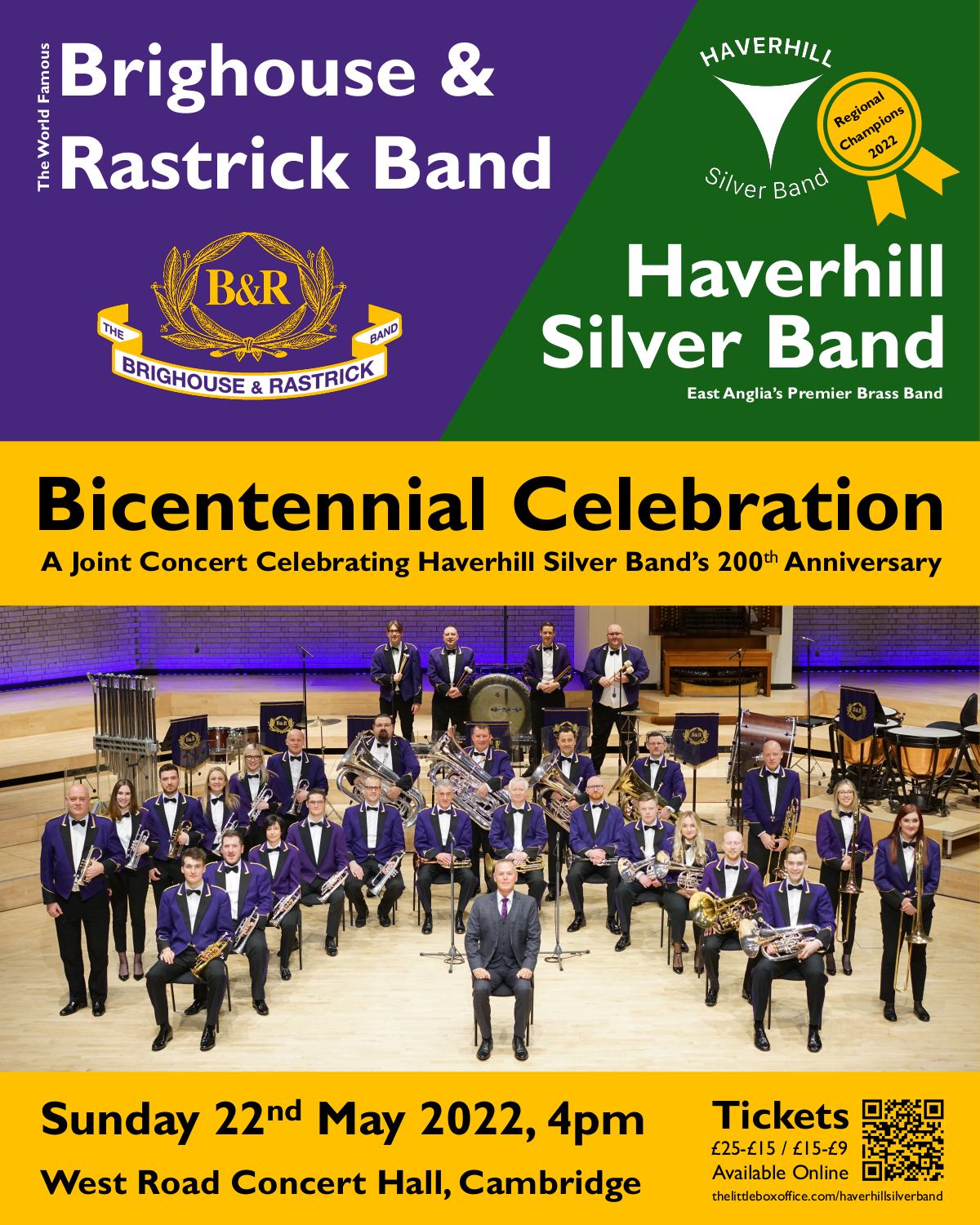 In celebration of their 200th anniversary, Haverhill Silver Band are delighted to present a joint concert with the world famous Brighouse and Rastrick Band in West Concert Hall, Cambridge. The concert starts at 4pm and will feature a set from each band and a rousing massed bands finale.

About the bands:
Haverhill Silver Band is the current London & Southern Counties champion and is a nationally ranked Championship Section band and charity (registered charity number: 1182260) based in the market town of Haverhill in Suffolk. The town has a proud brass band tradition dating back to the 19th century, making the band one of the oldest in the country. Since those early beginnings, the band has earned a reputation for high-quality music making and under the baton of our current musical director, Paul Filby, we compete in contests across the country, as well as performing in concerts and community events throughout the year.
Since 2004, the organisation has also been home to the Haverhill Youth & Community Band led by band stalwart, Diane Pannell (BEM). Since its foundation, the band has flourished and now has a regular membership of over thirty enthusiastic youngsters and adults.
For information about the band and its history, please visit https://haverhillsilverband.org

The Brighouse and Rastrick Band hails from the West Ridings of Yorkshire. Formed in 1881 as the Brighouse and Rastrick Temperance band, the band retained this title until the 1920’s when on the appointment of the World-Famous Fred Berry as musical director, ‘Temperance’ was dropped from its title. In 1929, B&R broke into the highest level of brass banding winning both the July and September Brass Band Contests at Belle Vue, Manchester, a feat achieved only once before, and not equalled since. Since then, the band has maintained a reputation for musical excellence, winning numerous awards across the years. The band gained international fame in 1977 when their recording of Derek Broadbent’s arrangement of “Floral Dance” held the No.2 position in the British singles chart for nine weeks, selling over a million copies and earning them both Gold and Silver discs. ‘The Floral Dance’ has now become a permanent feature of the band’s programs as the ‘unofficial’ encore. Over recent years the band has been engaged in very successful collaborations outside of the Brass Band Tradition. Recordings with ‘The Unthanks’, Liza Pullman and appearances at Chris Evans’ ‘Car-Fest’ are just some of the ways that they are expanding their audiences.