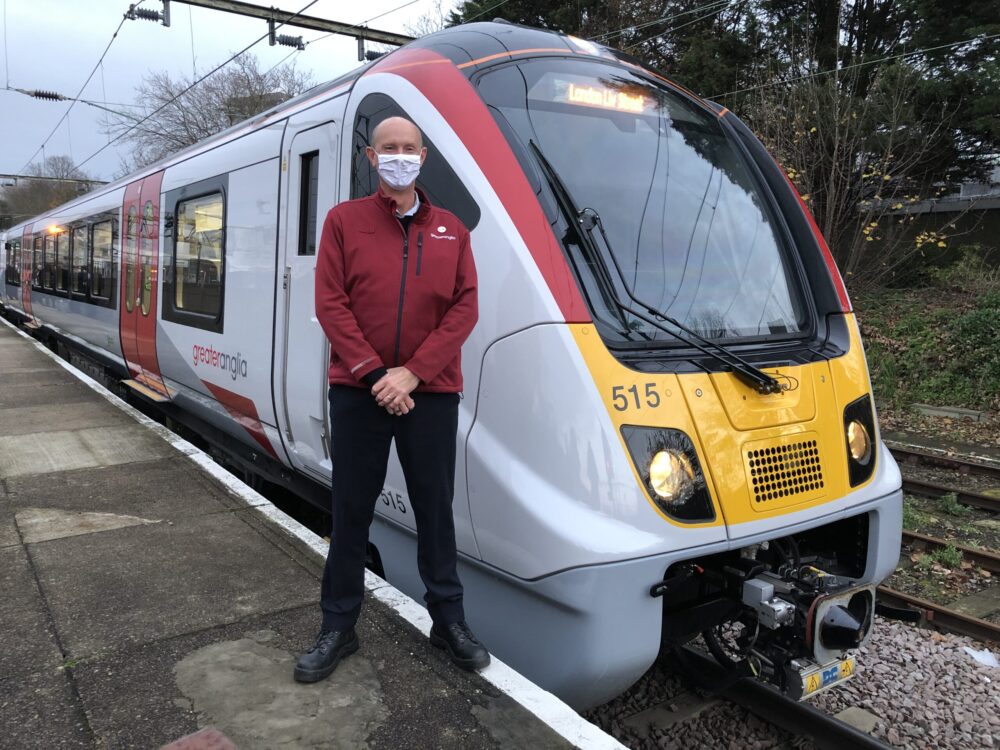 Greater Anglia is getting 133 five-carriage commuter trains made by UK manufacturer Bombardier, which will mostly run into London Liverpool Street from Essex, Cambridgeshire, Hertfordshire and Ipswich.

Ian McConnell, Greater Anglia franchise and programmes director, said: “We are absolutely delighted to have put the first of our brand-new Bombardier trains in passenger service. All through the pandemic, our teams have been working hard to carry out safety and performance tests on these trains, in partnership with Bombardier. At the same time, we’ve been training our staff and getting stations ready for these new trains. We’re confident these new trains will improve our customers’ journeys as they are longer with more seats and all the mod-cons modern passengers expect.

“Last year, Network Rail finished a long-term programme to completely replace the overhead wire system which was installed in the 1950s on the Southend Victoria line and we are now introducing brand new trains on this route, so together we’re transforming the railway in this region.”

The new five-carriage Class 720 Bombardier AVENTRA trains, which can be used as five carriage trains or coupled together to form 10-carriage trains, are longer with more seats. They have USB and plug points, fast free wifi, air conditioning, improved accessibility features including a disabled toilet on every train, better passenger information screens and dedicated cycle spaces.

The trains are the first in the UK to have underfloor heating which works with an overhead heating and ventilation system to improve passenger comfort and increase foot room for passengers sitting in window seats. They feature regenerative braking which delivers energy back into the electrical supply network, rather than wasting the energy, through heat, as is the case with conventional systems.

“We have worked really closely with Greater Anglia to ensure that the production, testing and delivery of the new trains has continued despite the continuing impact of COVID-19. Higher capacity, more sustainable, and packed with features such as wifi, USB charging and underfloor heating, the new electric trains will play an important part in helping transform journeys across the Greater Anglia network.”

The trains have been procured and financed by Angel Trains. Angel Trains Chief Executive Officer, Malcolm Brown, said: “The Class 720s entering service for the first time is a huge milestone and, as a leading investor in sustainable rolling stock, we’re proud to have supported Greater Anglia throughout this transformative project.

“Replacing the current suburban fleet, these state-of-the-art vehicles will go a long way towards enhancing the rail travel experience for thousands of passengers and modernising UK rail.”

The roll-out of Greater Anglia’s new Bombardier trains will continue on Great Eastern routes in Essex and to Ipswich next year and is expected to begin on the West Anglia route in the second half of 2021.

Greater Anglia is replacing every single train on its network with brand new trains. The first new train – made by Swiss manufacturer Stadler – entered passenger service in July 2019 on the Norwich–Lowestoft route.

Settled status: are your EU workers ready or at risk?