King's College Chapel is a splendid example of late Gothic (Perpendicular) architecture. It was started in 1446 by Henry VI (1421-71) and took over a century to build. It has the largest fan vault in the world and some of the finest medieval stained glass. It is also the venue for the Christmas Eve service. 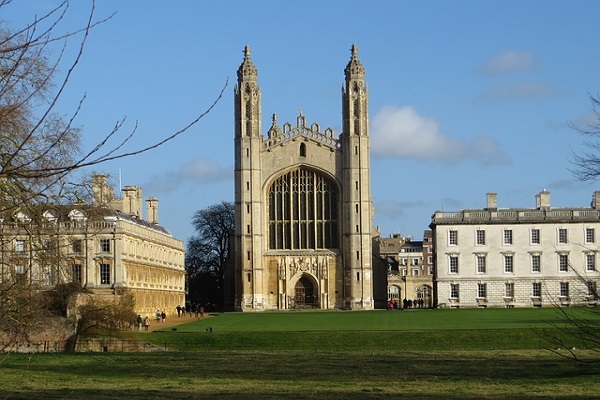 The Chapel plays a central role in College life. It was built as a place of daily worship for the College scholars, and today the Choir still sings Evensong daily during term time.

Henry was only 19 when he laid the first stone of the 'College roial of Oure Lady and Seynt Nicholas' in Cambridge on Passion Sunday, 1441. At the time this marsh town was still a port so, to make way for his college, Henry exercised a form of compulsory purchase in the centre of medieval Cambridge, levelling houses, shops, lanes and wharves, and even a church between the river and the high street (now King's Parade). It took three years to purchase and clear the land.
Initially King's was to have a Provost and 12 impoverished students (the number of the apostles) but after work had begun on the Old Court, Henry decided on a much grander plan. He now intended King's to have 70 scholars (representing the 70 early evangelists chosen by Jesus) drawn exclusively from the king's other foundation at Eton. For over 400 years King's College admitted only Etonians and claimed the privilege that its students should receive degrees without being examined.

It was left to the Tudor kings, Henry VII and Henry VIII, to achieve the final, spectacular completion to the Chapel.
Henry VII defeated and killed Richard III at the Battle of Bosworth in 1485. Initially he was preoccupied with bringing the country under control, and building work on the Chapel virtually ceased for another 2 years, despite the College's petition to the new king that 'the structure magnificently begun by royal munificence now stands shamefully abandoned to the sight'.

~Things To See and Do, Places to Visit in Cambridge~