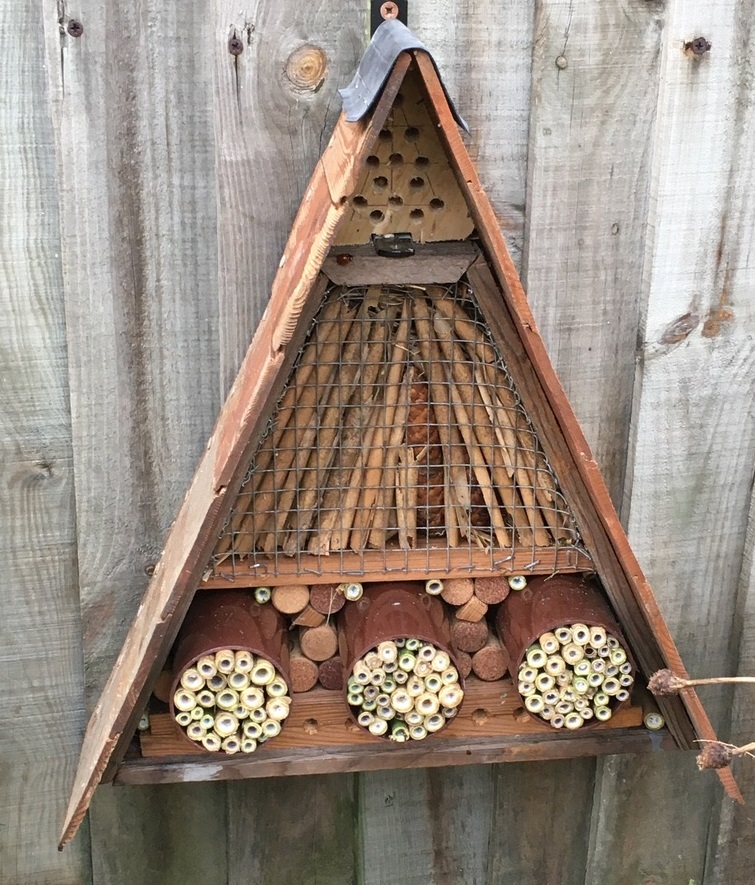 A new ‘hotel’ at Shelford station, Cambridgeshire, will offer a cosy welcome to tiny six-legged customers this winter.

Station Adopter Volunteer, Philip Ball, constructed the Bee Hotel to help protect the fragile insect populations that have made Shelford station their home thanks to the many wildflowers he and wife, Kathryn, have grown there.

Since becoming ‘station adopters’ for Greater Anglia in 2015, Philip and Kathryn have transformed Shelford station into a wildlife haven through their unique and dedicated environmental approach to gardening.

They grow specialist varieties of bee friendly plants – including wild flowers species – and observe the impact that they have on butterfly and moth populations and other insects. The recorded insects are photographed and displayed in the waiting room for all to see and submitted for national and regional insect population surveys.

Philip said: “There are many species of insects and invertebrates, including bees, that need dry habitats such as piles of twigs, rotten wood or leaf litter for shelter over the winter months.

“I decided to build a Bee Hotel to enhance the environment, so that the insects here at the station would have somewhere safe to nest and hibernate.

“We are looking forward to it helping improve the biodiversity at Shelford station and encourage pollinating insects to flourish even further.”

Greater Anglia’s Customer and Community Engagement Manager, Alan Neville said: “Kathryn and Philip’s efforts, along with other station adopters across the network, are helping the railway in East Anglia to lead the green revolution by enhancing biodiversity at the rail station and helping to improve the local environment.

“Greater Anglia’s new fleet of trains will contribute even more thanks to their more environmentally friendly features which reduce CO2 and particulate emissions in the region further still.”

Across Greater Anglia’s network many other station adopters are also making their rail stations more wildlife friendly – with the railway increasingly being recognised by ecologists as a ‘green corridor’ which provides a sanctuary for many different kinds of flora and fauna. Many have planted gardens which provide habitats for local wildlife as well as making the stations more welcoming. In total over 5700 square metres of gardens are tended to – the equivalent of 29 tennis courts.

Greater Anglia’s Station Adoption initiative sees local people across the network get involved with their local stations to come up with ideas and projects that benefit their communities.

Last year, Greater Anglia reduced its total carbon emissions by 11 per cent overall, preventing 13,570 equivalent tonnes of carbon dioxide, a greenhouse gas that contributes to global climate change, being released into the atmosphere.

Webtec expands its operation in Europe

Kershaw Light the Way for Growth